I am Hitarth, the founder of Saasific. I have worked with 10+ DTC brands (Bare Anatomy, Vahdam, Masterchow, Ras Luxury etc.) in the last 3 years and helped them scale acquisition as well as retention. Hence, this experience led to an insight that automation can play a very big role in scaling up all business processes.

Our goal is to make automation accessible to all business owners, since eliminating repetitive work is the key to freeing more people to be creatives, innovators, & exceptional employees.

What will we cover?

A very brief history of SaaS

The concept of SaaS existed from the early 1960s but it was not widely used due to the lack of proper hardware and software capabilities. In the 1990s, ASP (Application Service Providers), which are essentially no different from SaaS, began to store data off-site to free up space for the users. Eventually this system failed as these companies were not able to keep up with their promises. The main reason for the failure of such a model back then was again due to the technical limitations (such as that of slow loading time, manual creation of an instance for every customer, and many more) of the time. With the increased virtualization and cloud-based scalability, SaaS is not only sustainable and scalable now but has already become a vital part of all industries.

Size of the B2B SaaS market

The number and type of users of SaaS products has increased rapidly in recent years. Though initially positioned as ideal for SMBs and startups, companies of all shapes and sizes are finding SaaS a palatable, affordable solution that empowers agility and digital transformation.

Recent research finds that:
1. The SaaS market is currently growing by 18% each year
2. By the end of 2021, 99% of organizations will be using one or more SaaS solutions
3. Nearly 78% of small businesses have already invested in SaaS options
4. 70% of CIOs claim that agility and scalability are two of the top motivators for using SaaS applications

In the near future, there will be a need for a place where people can sell and buy their own digital tools. Also, an additional but important layer that comes with it is integration.

The Indian Software as a Service (SaaS) landscape continues to mature rapidly, with more
companies reaching larger scale and driving heightened investor interest. Investment in SaaS has increased 170% over 2020 and is expected to reach $4.5B in 2021. This interest spans both early-stage Indian SaaS companies, with an 85% increase in average value of seed rounds over 2019, and later-stage SaaS companies, with a 20 percentage point increase in share of Series D+ funding rounds over 2019.

This heightened interest across investment stages is explained by Indian SaaS companies that are maturing and have proven scalability. In 2021, more than 35 Indian SaaS companies had $20M+ annual recurring revenue (ARR)—a sevenfold increase over five years—with between seven and nine of these companies reaching the $100M ARR milestone (vs. one to two companies five years ago).

India’s SaaS transformation is driving value creation in four ways:
1. Growth in exits: The number of Indian SaaS exits increased 100%, from 6 in 2018 to 12 in 2021, with the Freshworks initial public offering (IPO) initiating a new wave of exits.
2. High capital efficiency: Indian SaaS firms have excellent ARR-to-funding ratios, in line with global SaaS peers, with select Indian companies even outperforming their US counterparts. Mainly due to lower cost of human capital to build the product.
3. Creation of talent pools: Indian SaaS companies are building a talent pool of professionals with SaaS-relevant skills and currently employ more than 62,000 people in India.
4. Cascade effects: More than 250 new Indian firms have been founded by former employees of Indian SaaS companies and now employ more than 5,000 people.

Players in the market

The two key stakeholders in the SaaS industry are the users (people or companies that use SaaS products), and the vendors (companies that provide and maintain SaaS). The recent boom in the industry has given rise to some new problems for both sets of players. 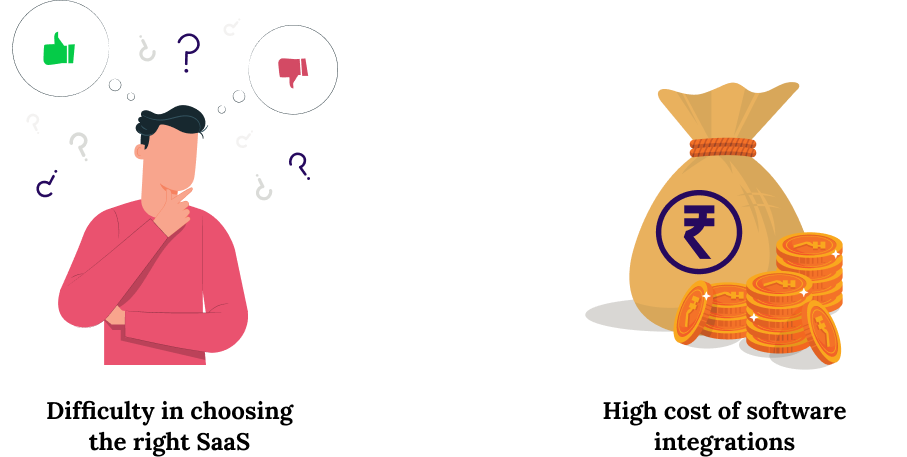 Difficulty in discovering and choosing the right SaaS

With so many options out there and more being added to the market by the day, it becomes extremely difficult for a user to find and select the right SaaS. There are over 100K softwares in the market as of now and the industry is growing at an unprecedented rate of about 20% every year. Adding certain filters, like searching for a particular usecase does reduce the number of SaaS available, but it still doesn’t narrow the scope enough to remove confusion. Each of the multiple softwares solving a particular problem has its own strengths and weaknesses and understanding these subtle variations between similar products is key to selecting the right software for the user. To add onto the confusion, newer softwares that are being launched in the market, which might solve the problem in a better way, might not yet have the same market visibility as other softwares that have been in the market for years. This causes users to miss such softwares in their initial scans. We can see that it is becoming increasingly difficult and time consuming for a user to find and select a SaaS that will be the right fit for their needs.
‍
Currently users solve this problem using websites like G2 and Capterra which serve as a repository for reviews and ratings of softwares provided by existing users. While this can help to a certain extent, these websites are also businesses which need to generate income. These websites charge vendors for a software listing on their website and those that pay more tend to be featured more, similar to the business model of google. This then starts a cycle of these softwares being more discoverable which leads to more users and eventually a higher number of reviews and ratings which is perceived as more trustworthy. To sum up, the users tend to receive biased information on the best softwares for them rather than a software that is technically more suitable.

A particular company employs multiple SaaS in various aspects of its functioning, such as CMS, CRM, Marketing, Sales, operations, logistics and many more. It has become necessary for easy flow of data between these softwares to ensure smooth functioning and increasing productivity. The industry trend is to enable this flow of information through APIs.
Integrating these APIs to allow automation of tasks requires the company to have a dedicated tech team to handle it, or to use integration platforms such as Zapier or Integromat. This cost is separate from what the company is already paying for the various individual SaaS platforms and in many cases the cost of the integrations is more than the cost of the individual SaaS itself. With the success of Zapier, we see more and more such integration platforms cropping up that try to provide the same service at lower costs. This leads to users constantly jumping from one platform to another.

Visibility has become the key factor in this game, because of the overwhelming number of options available in the market. Vendors tend to spend upto 30-70% of their revenue on advertisements on Google, Facebook, LinkedIn and other platforms depending on maturity of the software. This increased demand for advertisement real estate has driven up the cost per click. Users have also evolved and have developed banner blindness, where they train themselves to ignore banners and advertisement content on websites, driving up the cost per click even more. On the other hand, it is becoming increasingly cheaper to build and maintain cloud based services, so the vendors spend a lot of money acquiring new customers but the revenue generated through this acquisition is decreasing. In some cases the payback period can be more than two years.
‍
Most vendors cannot afford to spend so much on advertising. So they spend more resources on content creation to drive organic traffic. This includes SEO optimization and publishing a large number of blogs. The problem here is that since review platforms like G2 and Capterra have a large number of backlinks, they tend to dominate the google search results for most major keywords in this field. So vendors pay these platforms to list their software (which is less than the cost of advertising directly on google). But again due to the large number of softwares in the same category, the visibility boost is not a lot.

In the previous decade, since the number of software in the market was limited, there were very few integrations required (most of which were done by the vendors themselves). Now and henceforth this will become extremely difficult as any new software that launches will be required to have integrations with most of the existing softwares. This becomes a huge challenge for the vendor.
‍
A solution to this was provided by platforms like Zapier and Integromat which provide a development platform for software vendors. The idea is that once a single integration is created to Zapier, the vendor’s software automatically links to all the other softwares available on Zapier. This sounds like a really good solution but the downside is that the end users have to pay for access to Zapier separately. At first glance the price of such integration platforms may not be considered very high, but when the price of the integration platform becomes higher than the software subscriptions themselves, it doesn’t seem like the best solution.

How are we solving their problems?

Integrations with most tools

We are in the process of creating a platform which supports integrations to most tools, starting with those needed in the e-commerce industry. We will then expand the platform across other industry verticals to build a comprehensive, all-in-one solution.

New customers looking for completely integrated tech stacks will be a large part of our customer base. This provides an easy and cost effective way for SaaS companies to acquire new customers

Why are we staring with Ecommerce?

Zapier is not focused on ecommerce

Though Zapier has a large pool of automations, it has very limited use-cases for the ecommerce industry. They do not provide deep support for ecommerce merchants. There is a requirement of a better automation and support system for the burgeoning ecommerce industry and Saasific is here to fill the gap.

Saasific’s founder is experienced in this domain

Hitarth Shah, founder and CEO of Saasific, has worked in the ecommerce industry and has in depth knowledge of its inner workings. With his expertise, we are confident that we can solve the automation problems faced by this industry.

Worldwide boom in the D2C sector

We see lots of small businesses opening up all around the world, and some of them solely operate online. Majority of such ecommerce businesses are D2C (Direct to Customer) and they work in small teams. The use of no-code SaaS integrations to automate their workflows could greatly optimize their work efficiency.

How do we compare against our competition? 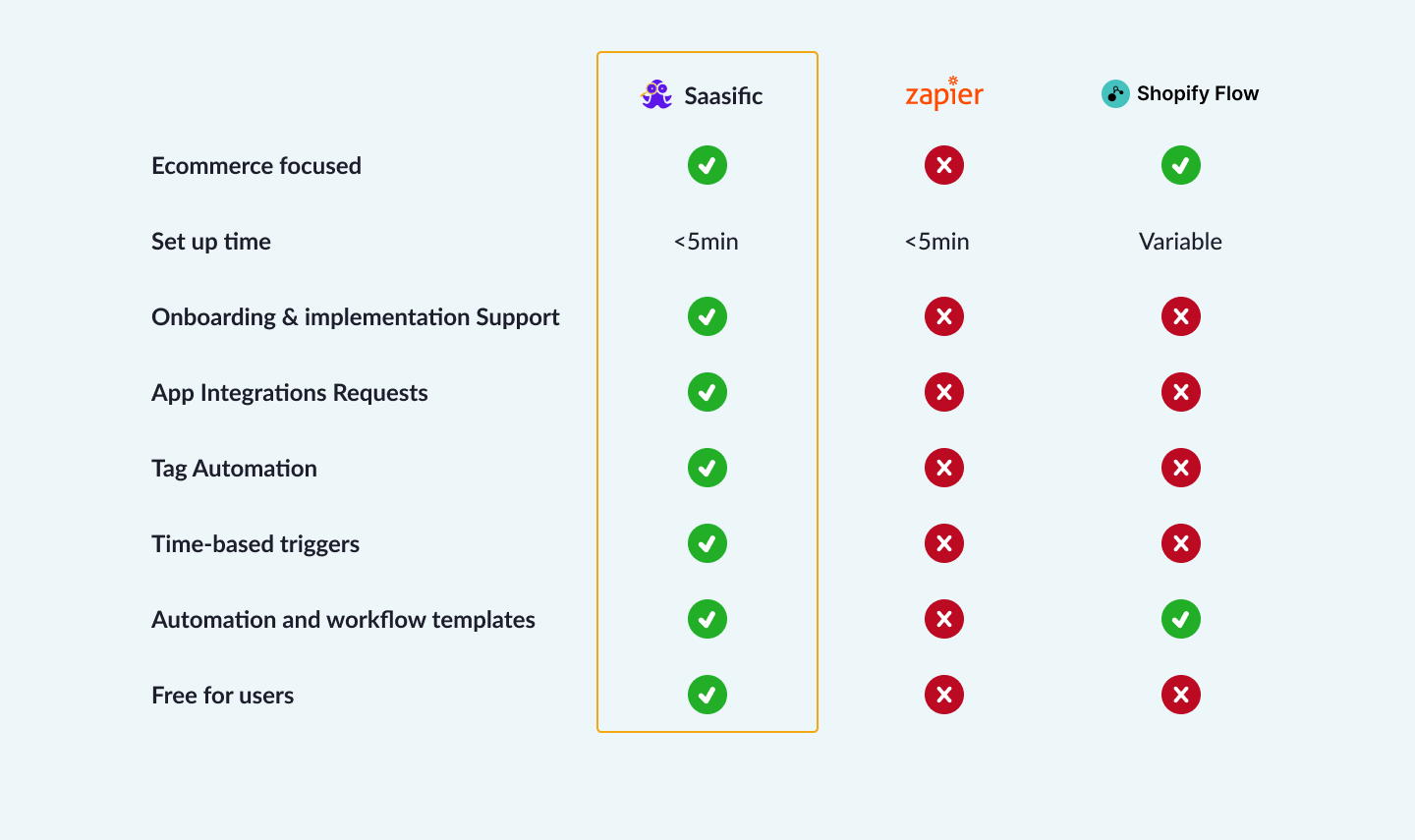